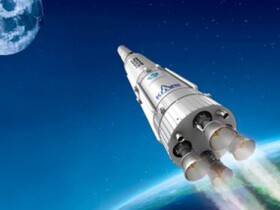 On September 1, 2010, Laurence Price, Deputy Orion Project Manager at Lockheed Martin, sat for an interview with Dr. David Livingston of The Space Show, a biweekly radio talk show also available online in podcast form.  During the interview, Mr. Price mentioned that a precursor Orion spacecraft could be launched into orbit as early as 2013 by a United Launch Alliance Delta IV Heavy.

Mr. Price explained that Lockheed Martin had been working to “decouple” the Orion spacecraft, a crew carrier originally designed for NASA’s now-shelved Constellation lunar program, from its launch vehicle.  The team wanted to add flexiblity to their planning, so that their program could continue while the government decides on NASA’s future.  Since Ares I, the Constellation crew launch vehicle, will likely not be developed, this approach only makes sense.

When President Obama canceled NASA’s Constellation program in February, 2010, Orion was left without a mission.  Realizing that Orion would also be canceled, the President ordered NASA, in April, 2010, to begin developing an ISS crew rescue vehicle based on Orion’s design.  This decision kept Lockheed Martin’s program going, though at reduced staffing levels.

Prior to the cancellation, the Orion team had been planning for an “Ares I-Y” suborbital test flight, probably in 2012 or 2013, followed by an unmanned orbital test flight in 2014.  The first crewed flight was expected to occur in 2015.  These schedules were slipping with the ongoing Constellation budget squeeze.

Mr. Price provided two important revelations.  First – that the Orion team, watching NASA’s proposed FY2011 budget work its way through Congress, had been planning broader goals than just crew rescue for Orion.  Orion was being designed to go both to ISS and to asteroids.  Second – that plans were afoot for an earlier orbital test flight, in 2013, to be launched by a Delta IV Heavy, to be followed by crewed flights beginning in 2015.  The plans required funding, which Mr. Price said had yet to be allocated, though he believed that portions were in the Congressional bills.

The rationale for using Delta IV Heavy is, essentially, that it exists.  It is currently the only launch vehicle in the U.S. inventory capable of lifting an Orion spacecraft.  Others projected to be able to do the job, such as Atlas V Heavy, are still on the drawing board.  The Orion team wanted to avoid getting bogged down in a launch vehicle development effort.  Ariane 5 could also lift an Orion test flight, but Mr. Price noted that using the European launcher would add substantial ground processing complexity that the team had decided to avoid.

Orion is being designed to be orbited by any number of launch vehicles, including any “Space Launch System” super heavy lifter that NASA might one day develop.  Once the spacecraft is “married” to Delta IV Heavy, however, it might prove difficult to “divorce” Orion from that rocket.  In the spaceflight business, such relationships tend to last.