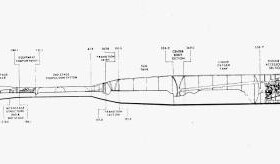 Although the commercial communication satellites launched by Europe’s Arianespace launchers have grown larger and heavier, scientific and Earth observation satellites have tended to remain relatively light, weighing in at two tonnes or less.  Scientific satellites also tend to use polar or other orbits not used by geosynchronous satellites.  Vega is designed to provide a way for such specialized payloads to fly economically.

Vega, designed to haul a reference 1.5 metric tonne payload into a 700 km polar orbit, will consist of three solid rocket stages topped by a liquid fourth stage.  The 310 tonne thrust P80 first stage is derived from a single segment of the Ariane 5 strap-on booster.  The second stage is a 122 tonne thrust Zefiro 23.  Stage Three is a 32 tonne thrust Zefiro 9.  All three stages are equipped with flexible nozzles and to control vehicle pitch and yaw during their burns.

The fourth stage, named “Attitude and Vernier Module” (AVUM), is equipped with a low-thrust liquid hypergolic propulsion system.  The AVUM stage will provide roll control during solid rocket stage burns, attitude control during coast periods, circularization burns when needed, and final velocity trim.   Vega avionics, which are derived from Ariane 5 systems, will be located on the AVUM stage.

Vega will stand 30 meters tall, will have a maximum 3-meter diameter, and will weigh about 137 tonnes at liftoff.  The launcher will fly from Kourou Space Center’s ELA 1 launch site.  ELA 1, which once handled Europa 2 and Ariane 1, is being retrofitted for Vega.   Arianespace will conduct Vega launch campaigns.  Vega’s initial qualification flight is expected to be followed by two to four operational launches per year.

Although proposed to become a European project by the Italian Space Agency in 1998, Vega did not win ESA approval until December 2000.  In its final form, the project was reshaped to provide spin-off improvements for the Ariane 5 solid rocket booster.  Improvements include the development of a graphite epoxy filament wound case to replace the existing steel casing, an electromechanical thrust vector control system, and a carbon phenolic nozzle.   A modified composite propellant formula, HTPB 1912, was also selected.  Vega’s Zefiro motors were also to employ graphite epoxy filament wound casings.

Vega’s target launch price is about $23.5 million, less than comparable U.S. launchers but substantially more than Russia’s comparable Rokot/Briz.  Like many government funded launch programs, the price will not necessarily correspond to the actual cost of the launcher.  ESA governments agreed to provide nearly $290 million of subsidies to the Vega program during its initial five launches.  By agreement, the launch price will remain fixed for several years.

European political pressure could very well be applied to force European payloads onto Vega and away from non-ESA alternatives like the German-Russian Eurockot Rokot/Briz.  Just such a proposal was considered by ESA in 2005.

Vega endured a stop-start development effort during the 1990s.  Original plans called for use of a standard Ariane 5 booster steel-case segment for the Vega first stage.  The second stage would have been a Zefiro 16 (16 tonnes propellant) second stage.  The third stage would have been loaded with seven tonnes of propellant.  The original Vega would only have been able to boost one-tonne payloads to polar orbit.

Italy initially pressed Vega development forward, performing a Zefiro 16 static test on June 18, 1998.  The effort stalled after that, however, when France balked at fully participating in the project.  The Vega design was subsequently modified both to carry larger payloads and to serve as an Ariane 5 solid rocket booster improvement program.

When Vega won ESA approval in December 2000, development had to be reset.  Initial plans called for an initial test flight by the end of 2005.   Vega’s preliminary design review occurred in mid-2001, but the Critical Design Review did not occur until March 2004, a delay of nearly nine months from original plans.  By late 2006, the program schedule had slipped by nearly two years from original plans, largely due to funding issues.

The P80, which will be the only Vega stage prepared at Kourou, will hold 88 tonnes of propellant.  The stage, roughly speaking, corresponds to one segment of the standard P230 Ariane 5 booster.  A P230 uses two 100 tonne segments and one 30 tonne segment.

In September 2006, the AVUM module completed vibration testing at the European Space Research and Technical Center in The Netherlands.

An additional round of solid motor static tests for all three Vega stages was planned to occur during 2007.

The old ELA 1 launch zone will host Vega.  ELA 1 was originally built for Europa 2, which flew only one time in 1971.  The pad was subsequently modified for Ariane 1, which it hosted from 1979 until 1989.   The site’s mobile service tower was dismantled in 1991.

Vega launch site construction began in late 2004 with an initially-planned April 2006 completion date, but construction was still far from complete in September 2006.  The rebuilt launch site will include a fixed launch table atop a “launch bunker” fitted with exhaust ducts and a fixed umbilical tower.  A new mobile gantry will serve as the assembly building for the launcher and payload.   Four lightning towers will straddle the launch site, which will be identified as “ZLV” for “Zone de Lancement Vega”. 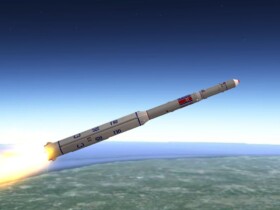