The Jupiter program, like all big rocket development efforts, started with propulsion. In this case, the propulsion already existed, or nearly existed, thanks to the long-running Navaho and more recent Atlas programs.

Rocketdyne tested its first “150K” S-3 engine at Santa Susana, California in November 1955. It delivered a mock up S-3 to ABMA during January 1956, and shipped the first of several 68.04 tonne-force (150,000 pound) thrust gas generator S-3 research and development engines to ABMA in July, 1956. One can imagine the von Braun team’s interest in the arrival of these innovative, powerful tubular wall engines.

There were about 300 tubes – nickle alloy tubes that were formed into near-rectangular cross sections and brazed together to create the thrust chamber and nozzle.  Stainless steel bands were welded to the exterior of the formed chambers to add strength.  The design provided an unprecedented thrust to weight ratio.

Engine testing began in September at the Arsenal’s Power Plant Test Stand.  Trouble was soon encountered during testing with four engines failing by November. There were instabilities that caused turbopump failures or that burned up injectors.

The problems forced ABMA and Rocketdyne to down-rate engines to the proven 61.24 tonne-force (135,000 pounds) thrust used for Navaho.  Down-rated engines would be used for the initial test flights while design modifications were underway. Successful tests with the down rated engines were achieved in January 1957.

The S-3 engine was similar to its Thor and Atlas cousins, but would uniqely use a steerable turbopump exhaust nozzle to facilitate vehicle roll control during first stage flight.  Roll steering was added in steps, as thrust was gradually increased to the originally planned 68.06 tonnes.  The final version, S-3D, was lighter, more compact, and used simplified starting and control systems compared to the initial S-3 variants.

At Redstone Arsenal, Test Laboratory director Karl Heimburg oversaw completion of a massive new Static Test Stand. The 44.2 meter (145 foot) tall, dual-position structure was begun in 1954 with Redstone in mind but it was finished for Jupiter by early 1957. In January 1957 the first flight Jupiter was erected in the west position, Static Test Stand West, by a giant gantry crane.

The Jupiter was fired for the first time on February 12, 1957. Harry Johnstone, test director, summarized the result in an on-line history. During the test, an explosion occurred in the LOX start tank discharge valve.

As a result, the team lost control pressure and was unable to open the tank vent valves. As LOX tank pressure increased a foreman named Paul Kennedy left the safety of his pill box position to connect a ground high pressure line and to block open the LOX tank vent valve on the missile, saving the missile from likely destruction.

Full vehicle static tests taught vital lessons. For example, after this test the team developed a fail-safe system that would open the vent valves if control pressure or power failure occurred during a test. Similar systems are still used today. The team also learned that the explosion was due to a lubricant in the LOX start tank discharge valve not being compatible with the LOX used by the Jupiter missile. A new LOX compatible lubricant was quickly developed.

The new test stand quickly proved its worth, with two Jupiter missiles often on the stand simultaneously, one on the East Stand side and one on the West Stand side.  Missiles built both by ABMA and by Chrysler were tested.   The peak years for testing were likely 1958-59, when most of the 30 R&D and test missiles were delivered.  During 1959, the East Test Stand was reallocated for use by ABMA’s Saturn program.

After implementing fixes, ABMA successfully static fired the first Jupiter and transported it to a mosquito invested, snake-ridden spit of land that few U.S. citizens had ever heard about: Cape Canaveral, Florida.

LC 5/6 was the first of the substantial ballistic missile launch complexes built on the Cape after 1955. Its twin flat pads, aligned to aim missiles south-southeast down the Atlantic Missile Range, were 61 meter (200 foot) square, and centered 152.4 meters (500 feet) apart. They shared a common blockhouse that was only about 91.5 meters (300 feet) from the center of each pad on the up-range (west-northwest) side.

Both towers approached the pads from the south. By mid-1958, an additional set of “bypass” tracks had been installed that allowed the towers to shuffle between all pads.

During early 1959, a new H-frame mobile service tower was installed at LC 6. The LC 6 tower rode on large pneumatic tire bogies instead of rails, requiring a dedicated paved “gantryway” that kept the H-frame tower emplaced at LC 6.

These were in reality little more than previously planned Redstone research and development launches. The Army decided in September 1955 to identify these as “Jupiter-A” missions in order to secure mission priority.

Oddly, U.S. Army ABMA and U.S. Air Force Missile Test Center records to this day disagree as to which Redstone launches were Jupiter-A missions. The Army lists Missile RS-11, launched September 22, 1955, as the first Jupiter-A, with the second (RS-12) on December 5, 1955. Air Force records show the first Jupiter-A launch occurring on March 14, 1956. Similarly, the Air Force considers the final three Jupiter-A missions, flown by RS-46, CC-43, and CC-48 in 1958, to be Redstone tests.

Twenty-one of the flights were successful, with ranges between 130 and 400 nautical miles achieved. Jupiter-A flights tested systems that were either shared with or closely related to Jupiter hardware. Among these were the Redstone ST-80 inertial guidance platform, Jupiter angle-of-attack sensors, warhead fusing systems, and explosive bolts.

RS-27, the First Jupiter-C, on LC 5 Before its Long Range Flight

Jupiter-C was the second launch vehicle used to test Jupiter components. It was designed specifically to test the Jupiter nose cone design, a test that required the test item to reach unprecedented range and velocity.

Both upper stages were spun up to 400 times per minute by two electric motors, a process that began before liftoff, to provide directional stability as the motors fired. Jupiter-C could fling the nose cone about 2,222 km (1,200 nautical miles).

Only three Jupiter-C launches were needed to prove the ablative heat shield nose cone. The first, flown on September 19, 1956 from LC 5 by Missile No. 27, was a test of the rocket itself.

No nose cone was carried. All three stages fired successfully and the final stage reached an altitude of 1,100 km (682 statute miles). A dummy fourth stage was placed atop the vehicle as an aerodynamic and structural test. It was apparent that a live fourth stage would have been able to push a small payload to orbit, but ABMA was not authorized to make the attempt.

Missile No. 34, the second Jupiter-C, carried the first scaled nose cone from LC 6 on May 15, 1957. The first stage operated correctly, but the second stage unexpectedly pitched up and yawed left as it fired. The third stage failed to ignite.

Although the nose cone reentered 778 km (420 nautical miles) short of its target, telemetry showed that the ablative heat shield worked. The short range prevented a planned nose cone recovery from being attempted. 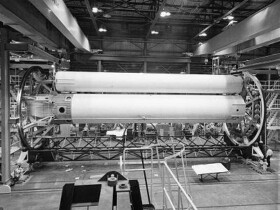 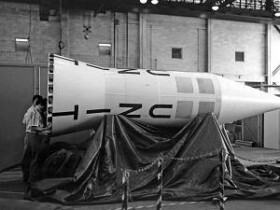