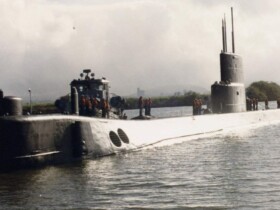 The Tsyklon space launch vehicle (also called Cyclone) first appeared in 1966. It was a derivative of the Soviet Union’s R-36 ICBM (NATO designation SS-9). The  inital flights were tests of the R-36O FOBS (Fractional Orbital Bombardment System), a missile designed to place warheads into orbit, then decelerate them to reenter over their targets before completing one full orbit.

The two-stage Tsyklon 2 first flew in 1967. Tsyklon 2, which flew from Baykonur’s Area 90, usually carried military ocean surveillance satellites.  In 1977, a restartable third stage was added to create the Tsyklon 3 space launcher.  Tsyklon 3 flew from Area 32 at the Plesetsk Northern Cosmodrome with elnit and Meteor payloads..

Both R-36 and Tsyklon were produced by the Yangel (Yuzhnoye) Design Bureau in Dnepropetrovsk, Ukraine. The first and second stage engines were built by Glushko in Moscow.  The third stage engine was developed by Yuzhnoye.  All of the Tsyklon stages used the storable propellants nitrogen tetroxide and unsymmetrical dimethyl hydrazine.

Tsyklon was the first space launch vehicle system designed to use a completely automated prelaunch cycle, including use of a special transporter-erector outfitted with automatic couplers for pneumatic, fluid, and electrical connections.

Tsyklon proved to be one of the world’s most reliable space launch vehicles. The final Tsyklon 2 variant had only recorded one failure in 104 orbital attempts by the end of 2004. Tsyklon 3 had eight failures in 121 attempts by the same date, most of which did not involve the original R-36 stages.

After the fall of the Soviet Union, the Tsyklon production line at Dnepropetrovsk was shut down.  Launches continued at a reduced pace, but the stockpile of Tsyklon vehicles was steadily depleted.  The United Start Corporation attempted to market Tsyklon commercially, but no contracts were signed.

In 2004, however, the governments of Ukraine and Brazil agreed to cooperate in the development and use of an R-36-derived Tsyklon-4 rocket from Brazil’s launch centre at Alcantara. This agreement called for the creation of a joint Ukrainian-Brazilian company named Alcantara Tsyklon Space with headquarters in Brasilia.