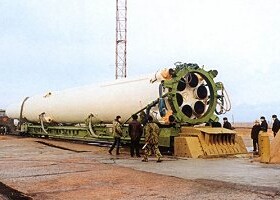 The Zenit (Zenith) rocket was the last, and most advanced, space launch vehicle developed by the former Soviet Union. Although it began life as a military satellite launcher, its primary use in recent years has been to boost commercial satellites into space for the multi-national Sea Launch venture.

Zenit development was begun by Dnepropetrovsk, Urkraine-based NPO Yuzhnoe during the 1970s as an effort to replace ICBM-based boosters with a purpose-built space launcher. Early plans called for a modular series of light, medium, and heavy-lift vehicles, but only the 11K77 medium version won approval.

On March 16, 1976, the Central Committee of the Soviet Union officially approved development of the 11K77 two-stage Zenit-2, a rocket capable of boosting 13.7 metric tons into low earth orbit (LEO) from Baikonur, as a replacement for the Tsyklon booster then in use. Subsequently, Zenit-2 won the job of launching the USSR’s new Tselina-2 electronic intelligence satellites while the Zenit-2 first stage was selected to serve as a strap-on booster for the Energia heavy-lift launcher. Initial planning called for the first Zenit-2 launch to occur in 1982.

Development of Zenit’s powerful staged-combustion cycle first stage engine by the Glushko design bureau (later called Energomash) soon ran into trouble, however. The four-chamber, single-turbopump kerosene/liquid oxygen (LOX) engine, identified as RD-170 for Energia and RD-171 for Zenit-2, suffered a series of test failures during 1981-83 that threatened both programs.

The development challenge was daunting. RD-170/RD-171 was the most powerful liquid propellant rocket engine ever developed, producing more thrust than the Saturn V F-1 (806 tons versus 789 tons) and operating at higher chamber pressures than NASA’s Space Shuttle Main Engine (245 bar versus 204 bar). Eventually, Glushko was able to qualify the powerful engine for flight.

The rocket’s first stage consisted of an engine compartment topped by a kerosene tank and, on top of both, a LOX tank. The tanks shared a common bulkhead. All four RD-171 chambers gimballed to provide three-axis control.

The second stage used a single fixed RD-0120 main engine augmented by the four gimballed thrust chambers of an RD-8 vernier engine. A toriodial kerosene tank wrapped around the RD-0120 engine. A separate cylindrical LOX tank was positioned above the engine section. The launch vehicle control system was mounted atop the second stage.

A new launch complex, named Area 45, was constructed on Baikonur’s eastern flank. The pad site allowed “automatic” launch processing, with the horizontally integrated launch vehicle transported to and erected on the “launch starter” pad only 90 minutes before liftoff. The process included automatic connection of propellant, power, and data lines. Area 45 included two pads. The “left” pad hosted all initial launches and is still in use. The “right” pad entered service in May 1990, but it was destroyed by an on-pad explosion during its second use in October of that year.

On April 13, 1985, the first 57 meter tall, 460 ton Zenit-2 lifted off from the “left” pad at Baikonur Area 45 with a dummy payload representing a Tselina-2 satellite. The first stage performed well, but problems with the second stage propellant controller caused the RD-0120 second stage engine to run out of fuel and shut down a few seconds early, leaving the vehicle short of orbital velocity. Another second stage problem doomed the second launch on June 21, 1985.

Finally, on October 22, 1985, the third Zenit-2 successfully reached orbit with a dummy payload that was announced as Kosmos-1697. Eight more Zenit-2 launches were performed before the vehicle was declared operational at the end of 1987.

Within a few years, however, the collapse of the Soviet Union, the end of the Energia/Buran program, and the technical challenges offered by the new rocket contributed to a series of failures. On October 4, 1990, the 15th Zenit-2 failed five seconds after the liftoff from Area 45 “right” launch complex. The 460 ton rocket fell back through the pad into the flame trench and exploded, obliterating the massive concrete launch pad. The next two Zenit-2 launches, in 1990 and early 1991, fell short of orbit when their second stages failed. After a series of successes, another Zenit-2 failed 48 seconds after liftoff on May 20, 1997.

Zenit returned to service with two successful government launches in 1998, but the rocket suffered an embarrassing failure on September 9, 1998. During its first international commercial satellite launch attempt with 12 Globalstar satellites, the rocket suffered a control system failure during the second stage burn. Globalstar had planned to buy multiple Zenit-2 launches, but after the failure the company switched to Boeing Delta II and Starsem Soyuz. The failure, combined with Russia’s gradual ending of Zenit-2 military launches, dealt a serious blow to the rocket. Only four Zenit-2 launches occurred between 1999 and 2001, and none took place in 2002.

Zenit managed an unlikely rebirth, however. During the early 1990s, several companies began studying the creation of a three-stage “Zenit-3” to launch commercial satellites into geosynchronous transfer orbit (GTO) from a floating launch platform. Payload mass could be increased by launching from the equator, where the Earth’s rotation provides more velocity to assist the launcher.

Hughes signed on as the first Sea Launch customer in 1995, adding three orders in 1996. Space Systems/Loral ordered five launches in 1996.

In late 1996, the “Sea Launch Commander” was launched from the Kyaerner shipyard in Scotland. Both “Commander” and launch platform “Odyssey” sailed to Russia in 1997 for outfitting. On June 12, 1998, “Commander” departed St. Petersburg, Russia for Long Beach, carrying the first two Sea Launch vehicles. Eight days later “Odyssey” left Russia for Long Beach, making an epic journey through the Dardenelles Straight.

After weathering a 1998 suspension of work order from the U.S. government due to technology transfer concerns, Sea Launch Zenit successfully performed its first launch with a dummy payload on March 27, 1999. On October 9, 1999, the second Zenit 3SL successfully boosted Direct TV 1-R into GTO.

On March 12, 2000, Sea Launch suffered its first launch failure. The ICO F-1 communications satellite was lost after the rocket’s second stage shut down 80 seconds early. A control pressure valve commanding error in the pre-launch ground sequence software was responsible. The improper valve setting caused control of the second stage RD-8 vernier engines to be lost after some time passed, so that the stage tumbled out of control. The rocket’s control system automatically shut down the RD-0120 engine when it lost control authority.

Sea Launch recovered with eight consecutive successful launches, but the 14th flight failed in mid-2004 when the DMSL stage shut down 54 sec early due a suspected loose electrical connection. The Apstar 5 payload was left in a transfer orbit with an apogee 14,000 km lower than planned, but the satellite was subsequently able to use its own fuel to reach the planned geosynchronous orbit.

Zenit 3SL then reeled off nine consecutive successes, including five in 2006.  Spaceway 1, orbited during that string, was, at 6.1 tonnes, the heaviest commercial GTO payload launched up to that time.  But the run ended emphatically on January 30, 2007 when SL-16 with SES New Sky’s NSS-8 satellite exploded in a huge fireball at liftoff.  The failure,  caused by the ingestion of a metal object by the RD-171M main engine’s LOX turbopump, knocked off and sank Odyssey’s 250 tonne exhaust deflector and damaged other parts of the platform and its launch equipment.  While Sea Launch scrambled to repair Odyssey, several payloads drifted away to Ariane or Proton.

Sea Launch was ready to return to flight during the final weeks of 2007, but poor weather conditions at the launch site forced Odyssey to return to port.  Zenit 3SL finally returned to service on January 15, 2008 with the successful launch of Thuraya-3.

While Sea Launch battled its way back from the SL-16 failure, a Zenit renaissance was being planned for Baikonur, where “Land Launch” Zenit flights were scheduled.   Zenit 2 SLB and Zenit 3 SLB variants would carry commercial payloads from Baikonur’s remaining 45/1 pad.  On June 29, 2007, a Zenit 2M, equipped with the RD-171M and upgraded digital flight control computer that the new Land Launch Zenit’s would use, flew successfully from Baikonur.

The first Zenit 3 SLB, a two-stage Zenit topped by an RSC Energia Blok DM-SLB third stage, arrived at Baikonur for pre launch processing in late 2007.  On April 28, 2008, the rocket carried Amos 3, an Israeli communication satellite, into near geosynchronous orbit from Area 45, Pad 1.

On June 24, 2009, about three months and 10 years after it performed its first demonstration space launch from a platform floating in the Pacific Ocean, Sea Launch Company filed for Chapter 11 bankruptcy court protection. The unique international consortium, owned by Boeing (40 %), Russia’s RSC-Energia (25 %), Aker ASA of Oslo, Norway (20 %), and Ukraine’s SDO Yuzhnoye/PO Yuzhmash (15%) listed assets of $0.1-0.5 billion and liabilities of $0.5-$1 billion.  Boeing said that it might have to charge as much as $0.513 billion against earnings as a result of the bankruptcy. Sea Launch reportedly owed Boeing $0.978 billion in loans, trade debt, and partner liabilities.

The Long Beach, California-based company said that it planned to consider selling one or more of its divisions, but that it intended to use cash on hand to meet operating expenses and that it intended to continue to operate after the filing.  Sea Launch owned a stake in Land Launch, which might or might not be considered a “division”.

It was the first time that a major, established launch services company had declared bankruptcy.  Other companies, like Kistler, failed prior to establishing service.  For that reason, it was difficult to predict whether Sea Launch would emerge as a continuing business.  The partners, especially Boeing, were likely in position to decide whether or not the business continued.

At the time of the filing, Sea Launch reportedly had a 10 launch backlog, including eight Sea Launch and two Land Launch missions from Baikonur, Kazakstahn. Two to three launches were planned for 2009, but Sea Launch had recently lost three payloads to Russian competitor International Launch Services.  The switches were caused by program delays following a 2007 Zenit 3SL launch failure, by the 2008 financial crises, and by delayed Zenit 3SL/Blok DMSL deliveries.